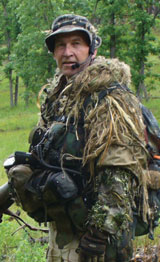 “For years, after I cleaned my rifle I would shoot another group to “foul” the bore before putting my rifle away. I did this because I had found the first shot after cleaning often would not predictably shoot to the same ‘zero’, and the first group after cleaning would not be as good as later groups. I have found a solution to both problems: Montana X-Treme Bore Conditioner. To use it, I clean as I always did, but now rather than firing a fouling group after cleaning, I use two patches of Bore Conditioner followed by a couple dry patches. The first shot is right where it should be and the groups are tight right from the start. I now have absolute confidence in the first shot. I save time, ammo, and avoid unnecessary bore wear. Plus I gain confidence in knowing my bore is clean, protected, and will place the first shot right where the rifle is zeroed. This stuff really works.”

Next Endorsement >
Scroll To Top